Bringing the Story of El Salvador to Québec

With six books under her belt since her arrival in Québec, the least one can say about Hada Lopez is that she has a passion for words and a love for the French language. A figure of resilience for fleeing El Salvador under difficult circumstances, a model of courage for learning her craft by chance, in a new language, the architect turned writer is working on her next literary creation, for which she has received a grant from the Conseil des arts et des lettres du Québec (CALQ).

“I have always written about my experiences,” Hada Lopez says about her motivations. “It’s like I need to tell people about the country I come from.” Forced to say goodbye to her country of origin, which during the 1980s was plunged in a civil war that killed her father, Hada Lopez found refuge in Québec from the danger.

Telling her story to youth

After settling here, she got the idea of writing sunny anecdotes about immigrants from tropical countries who have come to a northern territory. A few years later, on the advice of Éditions de la Paix, her project transformed into writing a children’s trilogy, Pedro Libertad (Bruine assassine, Le carnet de Don Antonio and Arôme de café), the story of a child who arrives from a war-torn country. Charmed by children’s literature and the purity of its audience, Hada Lopez later returned with Chien de secours for adolescents with dyslexia, the story Domingo, which appeared in the Antologia Napoli Racconta/Naples Raconte, and Les découvertes de Papille au Salvador. 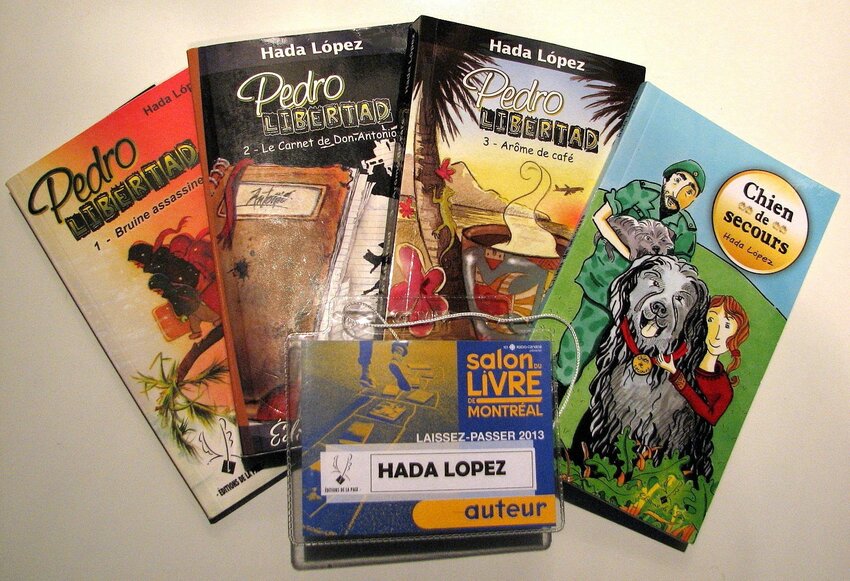 “Chien de secours is about a Canadian soldier who returns from a tour with post-traumatic stress and his child who doesn’t understand why he is crying all the time,” Ms. Lopez says. “It is based on my experience, because I also suffered from post-traumatic stress, and you never fully recover from that.”

These books, which were published in the 2000s, tell the story of El Salvador, as well as acceptance of the other, tolerance, solidarity, and generosity. “I wanted to share funny stories to make children laugh, but also understand where the child next to them in daycare comes from,” she says. […] “The power of the written word can influence their way of seeing things.”

Beyond writing stories in French, Hada Lopez has set herself the challenge of touching her readers through the language of emotion.

“When the editor wrote me to tell me he felt sad and that I made him laugh, I was so happy. I thought it was incredible that I could convey feelings through writing to someone who doesn’t know me and who I don’t know. That’s when I told myself I would keep going.”

Transmitting emotion requires just the right word. And the author says she developed the ability to find the right word because of her father, who was a Spanish teacher. In the car, the whole family would play word games and try to figure out the origin of words. Her curiosity for languages also grew and was transposed when she learned French.

Telling the story of the Maya

El Salvador will be at the heart of the next book by Hada Lopez, who received a research and creation grant from the CALQ for her project. Entitled Feu à ciel ouvert, the book, which she sees as a historical portrait for adults, tells the story of the descendants of the Maya. “I want to give a voice to people who are often forgotten by our society,” she explains.

The author is even taking courses on the history of El Salvador at the Academia Salvadoreña de la Historia to gather content and stick to the facts in her anthropological novel. The CALQ grant enables her to concentrate fully on the project, which involves meetings with historians and in-depth research to develop the characters.

Rooted in her community

Highly involved in the literary community, Hada Lopez combines her daily life as a writer with work as a cultural mediator with young people and adults. She has also put together Au nord du Nord, a social solidarity development project around literature and arts in El Salvador, and has created a collective of Québec artists, ILWIT This link will open in a new window, to bring arts and youth literature to her country of origin.

She also occasionally sits on CALQ juries. She offers great advice to people who want to submit a grant application. “You need to know your project inside and out, know what you are proposing, take the time to properly draft your argument, take care with your writing, and take the time to accurately calculate your budget.”

And if an application is denied, “you need to be humble and aware that this is a competition,” Ms. Lopez says. “An Olympic athlete can be incredibly disciplined, but they don’t always win. It’s sort of the same thing for someone making a grant application.”