The courage of her convictions 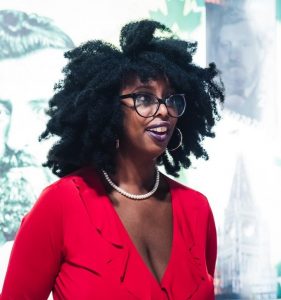 How do you defy a religion that has always been your guide and step into your own, when your renunciation lets down the community you grew up with and that has already plotted out your future?

Driven to this dizzying, but necessary reflection before going into theatre, playwright Lydie Dubuisson stages her own story in her most recent creation, Sanctuary.

Raised in a Québec/Haitian family, firmly under the thumb of the Evangelical Church, Lydie Dubuisson long steeped in choirs and biblical theatre. A career in the theatre was a remote, even unthinkable, possibility, and whenever her artistic sensibility was praised, she gave her spirituality credit.

“François Pérusse was part of our daily lives, but I had a very strict upbringing,” the playwright says by phone. “Radio, TV, and [popular] music were the work of the devil.”

When she engaged in activities outside the religious community, she felt like she was punished for it. The day of the first extracurricular show she took part in on the sly, tragically, her house was destroyed by fire. “Punishment, punishment, punishment! The way I saw it, I had sinned,” she says.

While the arts inevitably overtook her adult life, beginning studies in theatre as she turned thirty, Lydie waited for her children to be born before making it her primary career. “I didn’t have a choice anymore. I couldn’t keep juggling projects outside my work,” she says.

It was the right choice. The theatre professional carved out a place for herself in the succession of the Black Theatre Workshop This link will open in a new window and proved her talents with politically engaged plays defending the cause of black women, fueled by a desire for social justice.

In 2018, her public readings of Quiet/Silence resonated with many Muslim, Jewish, and Catholic women, who connected with the character of a pregnant woman trying to forgive her mother as the birth of her baby approaches.

Returning the following year with Blackout: The Concordia Computer Riots, a play co-authored with Tamara Brown, Kym Dominique Ferguson, and Mathieu Murphy-Perron, this time the playwright revived a conversation around the 50th anniversary of the race riot at Montréal’s Sir George Williams University with a plea against selective memory.

At once autobiographical and surrealistic, Lydie Dubuisson’s most recent work, Sanctuary/Sanctuaire, addresses the complex position of an adolescent pressured to accept an arranged marriage she does not want.

“What is this innate feminism that pushes us to say no, knowing that it is not what the people around us want?” she wonders.

The author received a grant from the CALQ to develop her project.

“I woke up the morning of my 40th birthday to the most wonderful validation of my life,” she says.

This support, which enabled her to hire collaborators, saw her through the development of a first public reading in English. With the support of the Black Theatre Workshop, it will be shown on Facebook and YouTube on December 10.

A French adaptation produced jointly with the Théâtre Aux Écuries This link will open in a new window will be presented in the spring, pandemic permitting.