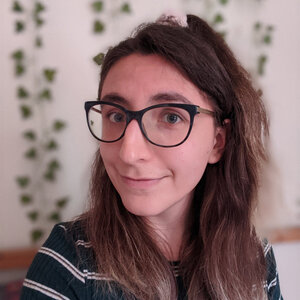 Kahentawaks Tiewishaw just received her bachelor’s degree in fine arts from Concordia University and already she is among the digital artists to watch. Recipient of a CALQ grant, the artist’s practice is thoughtful and refreshing, and her work, which integrates her Mohawk roots, continues the dialogue about Indigenous realities.

Kahentawaks doesn’t seem afraid to break down barriers. An ardent gamer in her teens, she took part in the very first Skins Video Game Workshop offered by the research-creation network Aboriginal Territories in Cyberspace This link will open in a new window (AbTec) at her high school in Kahnawake.

“I chose to participate because I didn’t know a lot of Indigenous digital artists, and I thought it might be fun to be one,” she says, summing up her first steps into the digital arts.

Growing up in Kanesatake

She had already begun a number of artistic practices, some of them taught in the community of Kanesatake. “Growing up there was interesting because the events of 1990 (Oka crisis) were still fresh in everyone’s minds. As a result, my upbringing was steeped in the importance of preserving and protecting our lands, language, and culture. The arts were present in my community in the form of learning traditional crafts like basket weaving, moccasin making, and beading,” she says.

Without realizing it, Kahentawaks was already developing the versatility that has made her a full-fledged multidisciplinary artist.

Infusing her creations with environmental and Indigenous issues, the 28-year-old tries to convey messages that generate empathy in the audience.

“[This] is why I am particularly interested in video games. They have a unique way of immersing the player in the world you’ve built for them. What better way to foster a deeper understanding between settlers and Indigenous people?”

Since video games attract young people in particular, the artist sees her practice as a way to normalize the use of Indigenous languages and promote their culture and history, and as a tool of revitalization. “Our youth are exposed to content from all over the world more than ever before, and it is extremely important that they see themselves reflected in that media. Otherwise, it is very easy to start thinking that our beliefs and way of life are obsolete,” Kahentawaks says.

For example, her most recent project, KARIHONNIENNIHTSHERAThis link will open in a new window, an interactive bilingual story in Kanien’kéha and English, features a young girl whose grandmother teaches her the importance of protecting the planet. The piece makes it possible to develop a vocabulary for the local fauna and flora on Mohawk territory and offers vibrant, finely drawn images. The first game entirely written, drawn, and designed by Kahentawaks (aside from the coding), KARIHONNIENNIHTSHERA had an enthusiastic reception at the 2019 edition of the imagineNATIVE Film + Media Arts Festival This link will open in a new window, the world’s largest event for Indigenous film and media art.

With her CALQ grant, Kahentawaks is currently working on Black Fawn (working title), an interactive graphic novel that should be available on different platforms at the beginning of the fall. The work will address healing and growth among Indigenous trauma survivors, as well as the movement in the U.S. and Canada for missing and murdered Indigenous women, girls, and two-spirit* people (MMIWG2S).

While Kahentawaks dreams of one day starting her own video game development company to produce both educational and entertainment games with an Indigenous influence, right now she is continuing her involvement with AbTec This link will open in a new window, which she has been gravitating around for many years. Hired as an associate director of the Skins Workshops, she is now offering the workshops she used to take part in as a teen.

This goes to show that involvement pays off, and Kahentawaks encourages young people to get involved in their artistic milieu. “This will not only expand your artistic practice, but you will also make a lot of useful and meaningful connections,” the artist says. She believes connections can be of benefit when applying for a grant that requires a recommendation from a peer or a mentor. Never underestimate the benefit of community!

* Two-spirit refers to people who identify as having a male and female spirit, and the term two-spirit can be used by certain Indigenous people to describe their sexual, spiritual, and gender identity.